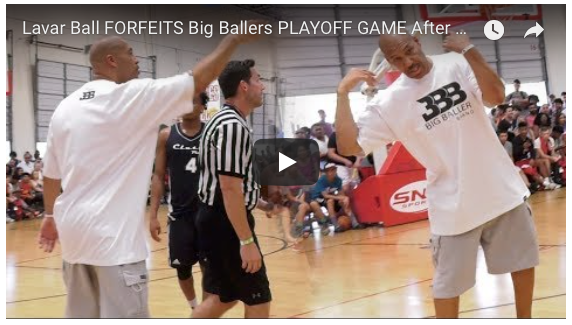 If you quit a game because you disagree with the officiating, what possible positive message do you believe you could be sending to your team?

The summer youth sports headlines have been dominated by AAU basketball. It’s unique setting where future college/NBA players like Zion Williamson and Bol Bol play on traveling all-star teams in games that look a little less disciplined than what you’d see in a high school state tournament but are full of incredible talent and highlights. It’s also unique in that some of the parents coaching or unofficially coaching their children’s teams are people you may of heard of… like, I don’t know, LeBron James!

In two recent games getting a lot of attention, AAU teams have quit before the game was finished, because the coaches disagreed with the officiating. It started with the notorious Lavar Ball, see LaVar Ball took his AAU team off the court and forfeited a game after getting called for a technical foul and was just followed by a team featuring one of the top players in America, see Team featuring Bol Bol walks off court with six minutes left in MAYB game. AAU makes a lot of sense on many levels. It’s a chance for top players to travel and get exposure and see really high level players as opponents. But it also has a bit of a yuck factor to me. The disrespect shown in AAU settings (don’t believe me, just watch one of the hundred of highlight videos from this summer) is not a healthy practice for youth sports.

I believe that if you coach a team, there are two possible reasons that you could quit a game.

2. If you force your team to forfeit for behavior/rule breaking reasons.
The same way a player is ejected from a football or basketball game, I believe it is within the coaches right to eject his entire team under extreme circumstances. This teaches players that about consequences for their actions.

But I’ll ask the question again, if you quit a game because you disagree with the officiating, what possible positive message do you believe you could be sending to your team? When we get to the point where ego allows coaches to quit games and have no consequences, what are we doing with youth sports? At what point do we say “enough is enough”? I get that AAU is big money, but what is the ultimate goal of youth sports? Perhaps that question is one that AAU coaches need to be able to answer before they can coach!

Coaches, make sure your players are having fun by Josh Cordell

Want to build a successful team culture? by Josh Cordell